One common feature to dress up the traditional square drywall corner is the use of bullnose corners, a rounded corner. Bullnose gives the corners a softer look and reduces the need for trim

in some instances. However, many homeowners who have this feature have also encountered difficulty after a period of time with the corner bead popping loose and leaving a very unsightly crack near the corner, thus negating the soft look desired which was the reason for using the bullnose in the first place!

The most common cause of the bullnose corner pulling loose is the way it is installed. Most installations call for a coat of topping compound placed on both corners. After that, the corner bead is simply placed onto the compound and then the corner gets skim-coated like a regular square corner bead. Nails or screws are usually only used at the ends of the bead. The topping compound is responsible for holding the bead in place. Far too often this application ends up looking like the corner pictured.

On one of our recent projects, the homeowner showed us several such corners in their home where the bullnose corners had failed. In one area in the Master Suite, nearly the entire perimeter of the tray ceiling, which featured the bullnose corners, had experienced substantial failure. So along with upgrading the wall color, we would also make the ceiling look brand new again! It was going to be an great transformation.

1. Our first step was to take a sharp razor knife and cut a line parallel to the existing crack in the drywall. Care must be exercised to stay away from the actual rounded portion of the corner. We tried to keep the new cut about 3/8″ – 1/2″ from the original crack.

2. Once we had the parallel cut made, we took a putty knife and flipped the joint compound out of the groove we had created. Removing the existing compound exposed the edge of the bullnose bead.

3. Now that the edge of the bead was exposed, we were able to determine where the bead had broken loose. We secured the bead using drywall screws (drywall nails can also be used).

4. The next step in the process was to refill the groove with joint compound. This step took more than one application as we were replacing multiple layers of original skim coats. Trying to replace a thick layer can result in cracking of the joint compound. Allow plenty of time for the compound to dry before applying the next coat.

5. Lastly, we sanded down the compound to a smooth finish, making certain the the groove was flush and full. The process is completed with a brand new coat of paint on the entire ceiling surface. The homeowner can now lay their head on their pillow and look up at a completely refreshed and renewed ceiling with those old cracks just distant memories!

At Final Coat Professional Painting, we not only enjoy helping our clients refresh the look of their home; many times this includes changing wall colors. Sometimes it means keeping the same color scheme but just renewing the paint surface. And occasionally, we get the opportunity to repair a significant issue that cannot be helped with a new coat of paint. We look forward to helping you with your next project!

In one of our recent projects, our client secured us to power wash their home. While the front is all brick, the two sides and back are vinyl siding. The north side of the house was covered in very unsightly algae. The remainder of the siding was covered in simply the natural accumulation of dirt.

In addition to the house, a significant portion of the back yard consisted of a patio area and deck. The deck was also showing significant signs of wear and disrepair. In fact, the homeowner was recently approached by a contractor stating the deck simply needed to be torn down. I convinced them to let me try to clean it up and then we could get a much better view of what needed to happen.

We arrived on the scene and did a quick walk-around to determine the best plan of action, set up our equipment and started in obliterating that gross green growth! We very quickly witnessed a wonderful transformation to white! BTW…did I mention that pressure washing on a hot, sticky 90+ degree day is almost enjoyable? We moved around to the back where the dirt accumulation was much less intense, but still it received a much needed cleaning.

Deck Cleaned and Ready For Stain

From there, our focus turned to the patio and deck area. The grime and wear were quickly stripped away as the wood was transformed to a nearly new look. After it was all cleaned, we performed a thorough inspection of the deck in order to determine a course of action. Other than a section of the deck that had suffered significant decay and deterioration, the homeowner was pleased to hear that a good stain would give them back a peaceful sanctuary for their coffee in the morning, or a place to relax in the evening. Rebuilding the decayed section would naturally be a part of the plan as well.

All in all, now the homeowner has added great curb appeal to their home with the complete exterior cleaning. Once we have completed the minor rebuild, and then apply a good stain, the back yard will again be a place to host family and friends for a cook out and entertaining. Stay tuned as we share the accounts of the deck restoration project!

Deck Cleaned and Ready For Stain

Wall, Soffit and Gutter Before

Ever since the late 1930’s when Aluminium Siding first burst onto the home builders scene, the term maintenance free has been used as a buzzword. Twenty years later, the phrase became even more widespread when vinyl siding made its appearance. The problem is that this phrasing is not entirely accurate!

Certainly, these two siding alternative products did vastly reduce the amount of upkeep necessary over traditional wood siding products. The task of painting the house exterior every few years had been all but eliminated. But we can’t simply ignore the exterior of our home just because it has vinyl siding!

Exhaust emissions, dirt, grime and dust all accumulate upon the surfaces of our siding. In some extreme cases, algae and similar substances manage to accumulate, leaving a very unsightly look to your castle. It is imperative that we keep up with regular cleaning of these types of siding. Not doing so allows

the heat and beating rays of the sun to bake these elements onto the surface of the siding. The longer we wait between cleanings, the more possible it is that these stains penetrate the surface and leave permanent, and unsightly, stains.

Another problem area is the gutters on your home. These can be easily overlooked because, quite often, they are not in our line of sight. Not keeping these cleaned regularly allows dirt and shingle granules to combine with leaves and foliage which creates

blockages and slow working gutters. Leaving them without maintenance allows for the decomposition of the organic material which then solidifies within the gutters and completely stops the flow of water as designed. When this happens, the water runs over the tops of the guttering, carrying with it the stains of the decaying material within. This causes permanent staining on the exterior surfaces of the gutter, usually blackish in color and is quite noticeable.

Maintenance free is a misnomer! Don’t get lulled into this false sense of security. Contracting to have your gutters cleaned regularly and also having your exterior pressure washed can help guard against permanent staining and keep high curb appeal for your home. At Final Coat Professional Painting, we can help you with these tasks. Contact us today for a free consultation and estimate. While you are at it, don’t forget your decks and concrete surfaces also!

Stock photo…but I had this truck!

I grew up in the home of a general contractor. Throughout my childhood, I was always trying to emulate the work my father did. His focus was masonry. I had a builders set (similar to today’s Lego’s) that consisted of plastic bricks. I built, in miniature, a lot of the buildings my father built in reality, sort of.

I had an affinity for “little” cars, and not realizing that they one day could prove to be a great source of income, I played with my cars and my Tonka’s. The sand pile beside the garage became my construction site. I built roads, and then I would sneak into the garage, dip into an open bag of mortar and pave my roads. (Not everyone had paved roads in their sandbox!).

Cochran House…one of the early projects I worked on.

As I grew older and stronger, I was recruited to accompany Dad to work. I wasn’t always a willing participant, but looking back on it later in life, I was thankful for the work ethic my father instilled in me. Eventually, I grew to enjoy the work as I became more of a skilled laborer. After marrying my wife, I even decided to pursue a career and working with my dad was the route I would choose. For several years, I worked full time, and later part time, with him. Even after changing career paths, due to the sudden downturn in the construction business in the mid 80’s, I continued to work odd jobs and stay connected to my construction roots.

When the full time missionary phase of our lives wrapped up a few years ago and we returned to the States, I needed to find a new path that would allow me to buy groceries and such, yet still maintain a flexibility to continue our ministry focus. Painting was something I had done on the side, but now it seemed that it was the perfect answer for this phase of life. My brother in law had recently started his own painting company and we quickly became a well-oiled work crew machine. When God provided us with our MIRACLE grandchild, we easily made the decision to relocate to be a part of her life ( well and her parents also). This opened the door for me to step into the role of Small Business Owner and Final Coat Professional Painting was born!

I had several construction options that I could have pursued but easily settled on becoming a painting contractor. It was a skill that I had been able to hone over the past several years and it was somewhat easy to at least get started.  I truly enjoy working with clients to see their project goals satisfied, whether a simple refresh or a major update!

Moving into a new city and starting a service-focused business is a challenge. Many new businesses are able to rely on family, friends and existing contacts to get started. We don’t necessarily have an abundant wealth of those but I am truly thankful that doors have opened and new contacts are begin made with each new project. We look forward to including you on that list soon if you are not already there! 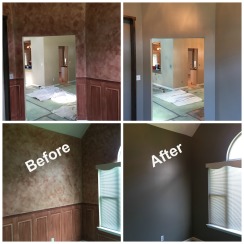 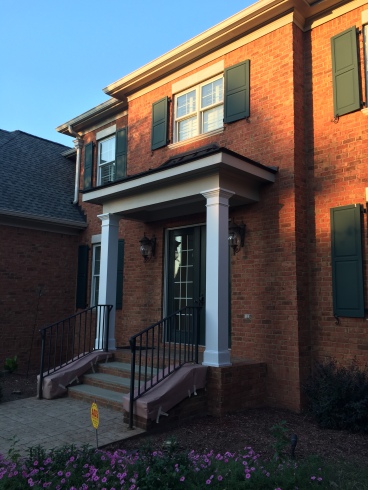